A Platinum Partnership
with Desjardins 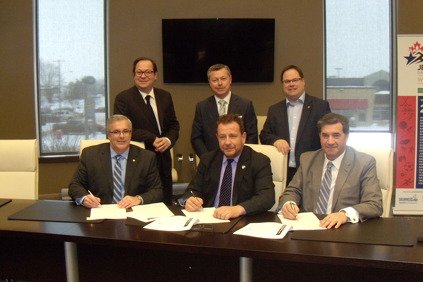 Picture taken at the signing of agreement for the North American Police and Fire Games. We can see Martin Dupont, general director of the DEDA; François Dumontier, president and chief executive officer of the Octane Racing Group, organizer of the Canadian Grand Prix and serving as a member of the executive board of the North America Police and Fire Games; Alexandre Cusson, mayor of Drummondville; René Lamothe, general manager of the “Caisse populaire Desjardins” of Drummondville; Normand Prévost, general manager of the “Caisse Desjardins des policies et policières”; and Gérard Charlebois, president of the executive board of the Drummondville 2016 North American Police and Fire Games and president of Essor Expo Media. Missing on this picture, Mr Robert Castonguay, general director of the “Centre de services financiers des pompiers”.

On February 19, the custodians of the four organisations were gathered around a table, accompanied by representatives of the city of Drummondville, to officialise the 50 000$ agreement.
This first edition of the North American Police and Fire Games will be held from July 1st to 10th 2016 in Drummondville and will host more than 2000 athletes performing in 25 sports disciplines as well as generating economic benefits of more than 3 000 000$ for the regional economy.

The organising committee of the Games predict an attendance of 100 000 spectators, spread on 10 days, in addition to 1000 accompaniers. The committee aims to have 17 000 policemen and 5 000 firefighters of the province of Quebec as well as policemen and firefighters from Ontario and New Brunswick in Canada, from the states of Maine, New Hampshire, Vermont, Massachusetts and New York of America.

These Games aim to promote a healthy lifestyle, which is very important for Desjardins, and are an exceptional activity for the region. Desjardins is a proud partner of the North American Police and Fire Games