The Gold for Three Citizens
of Drummondville 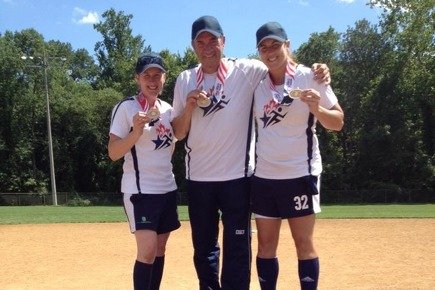 DRUMMONDVILLE. Two members of the “Service de sécurité incendie” as well as a member of the Drummond Institution, representing the city of Drummondville, won the gold medal at the World Police and Fire Games (WPFG) which took place in Fairfax, Virginia as well as in the metropolitan region of Washington (DC) from June 25th to July 5th of this year.

Marie-France Bergeron and Laurie Normand, members of the “Service de sécurité incendie” of Drummondville (SSID), joined the Team Quebec with Josiane Morin, agent at the Drummond Institution. For the latter, this constituted her 5th gold medal for the same amount of participations as she has participated in the Australia (2007), Vancouver (2009), New York (2011) and Ireland (2013) Games. “This was an unforgettable experience, we won the finals with a score of 4 to 3 against the Los Angeles Police Department (LAPD)”, explains Laurie Normand, preventionist.  For her part, Marie-France Bergeron, lieutenant for the public education at the SSID adds “Our coach and main sponsor, Gerard Charlebois, got to experience the gold with us and is also the president of the North American Police and Fire Games. This participation motivates us for the upcoming 2016 Games in Drummondville.”

The WPFG organised every second year, attract thousands of policemen, firefighters and members of correctional services. Although the average attendance is around 9000 participants, the Fairfax Games received more than 12 000 athletes coming from 70 countries and registered in 60 disciplines. These games are a great medium to promote good health and comradeship within the professionals working in the maintenance of law and order.

Drummondville will be hosting the North American Police and Fire Games from July 1st to 10th 2016. More than 3500 people, including 2200 athletes from the provinces of Québec, Ontario and New Brunswick as well as many American states will participate in 24 sports disciplines spread out on 9 great venues.  Marie-France and Laurie will be active members of the team as they will be the sports discipline coordinators for the feminine slow pitch event.

All benefits from the Games will be donated to two great causes: The Law Enforcement Torch Run for the Special Olympiques and the “Fondation des pompiers du Québec pour les grands brûlés”. This event will also be presented in 2018 as well as 2020.